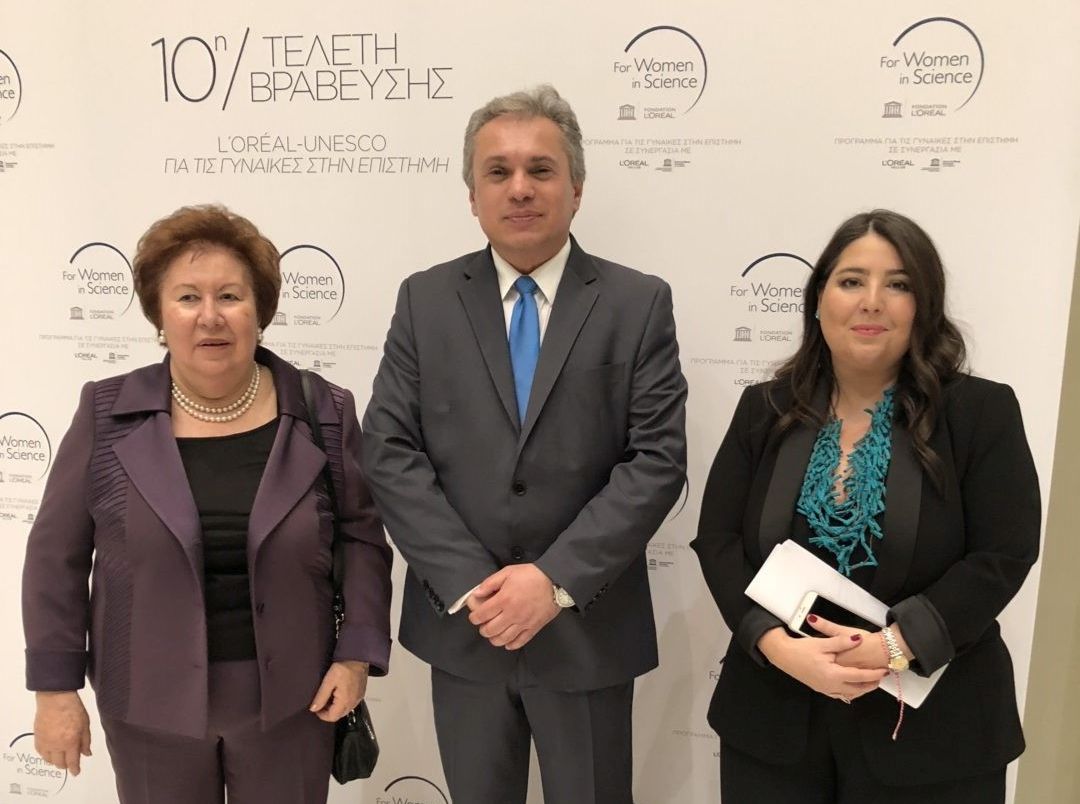 23 Mar 10th Ceremony of the L’ORÉAL-UNESCO Greek Award for Women in Science by L’Oréal Hellas and the Greek National Committee for UNESCO at the Zappeion Megaron – Presence of EHICA at the award ceremony (6.3.2019)

Wednesday, March 6, 2019, the 10th Greek L’ORÉAL-UNESCO Ceremony Award for Women in Science, was held at the Zappeion Megaron. At the ceremony there were important personalities of the academic and scientific community, as well of  the political, business and journalism field.

The Founder and President of EHICA, Mr. Vasilis Stathakis, was present at the event as a guest of UNESCO. There he had the opportunity to chat with UNESCO and L’OREAL executives, but also to congratulate the women who excelled in their field.

The 3 Greek researchers who were honored this year for their very important research work, but also for their contribution and dedication to science are:

Dr. Maria Antonopoulou, INN Postdoctoral Researcher, NCSR “Demokritos” and Taught / Associate Researcher at the Department of Environmental and Natural Resources Management of the University of Patras, which was awarded for her research on “Processes for the transformation of organic pollutants and the development of advanced technologies for their removal from natural and treated waters’

Dr. Maria Stamelou, Associate Professor of Neurology, University of Marburg, Germany, and Head of the Department of Parkinson’s and Kinetic Disorders at HYGEIA Hospital, which was awarded for her work “Seeking biomarkers and therapy for neurodegenerative diseases and especially for Parkinson’s syndromes “.

During the event, Maria-Aikaterini Papachristopoulou-Tzitzikosta, President of the Greek National Committee for UNESCO, said: “It is a very important day for both the Greek National Commission for UNESCO and L’Oréal Hellas as we celebrate the 10th Anniversary of the L’ORÉAL-UNESCO Greek Women’s Awards for Science. We are particularly proud of the 3 Prizes but also for the Program, which recognizes, rewards and supports new researchers. The 29 Greek scientists, awarded so far are an example and inspiration for the young Greek women in order to conquer their dream of a career in science, as well as vivid proof that women scientists can set high goals and achieve them, contributing greatly to a better tomorrow.

L’Oréal Hellas’s Director General, Mehdi Khoubbane, said “Equal representation of the sexes in research and science is indissociable with the values of L’Oréal. That is why we will remain firm in our commitment to supporting and rewarding Greek scientists who, with their research, manage to influence developments and innovate. Greece is one of the 117 countries that have developed National Programs within the framework of the L’ORÉAL-UNESCO Global Society for Women in Science. This year, we are particularly excited and proud, as the Greek awards are held for the tenth year. Through this institution, the newly awarded Greek scientists received valuable recognition and the necessary funding to enable them to continue their research in our country. ”

It is worth noting that the Greek Awards were instituted in 2006, while to date 29 female researchers from 15 leading Universities have been awarded. In addition to moral rewards, the awards encourage young Greek scientists to continue their promising research work in Greece, as it is accompanied by a 10,000-euro financial support.

The Greek L’ORÉAL-UNESCO Awards for Women in Science are part of the International Program, which was founded in 1998 to help improve the gender balance in the world of science. 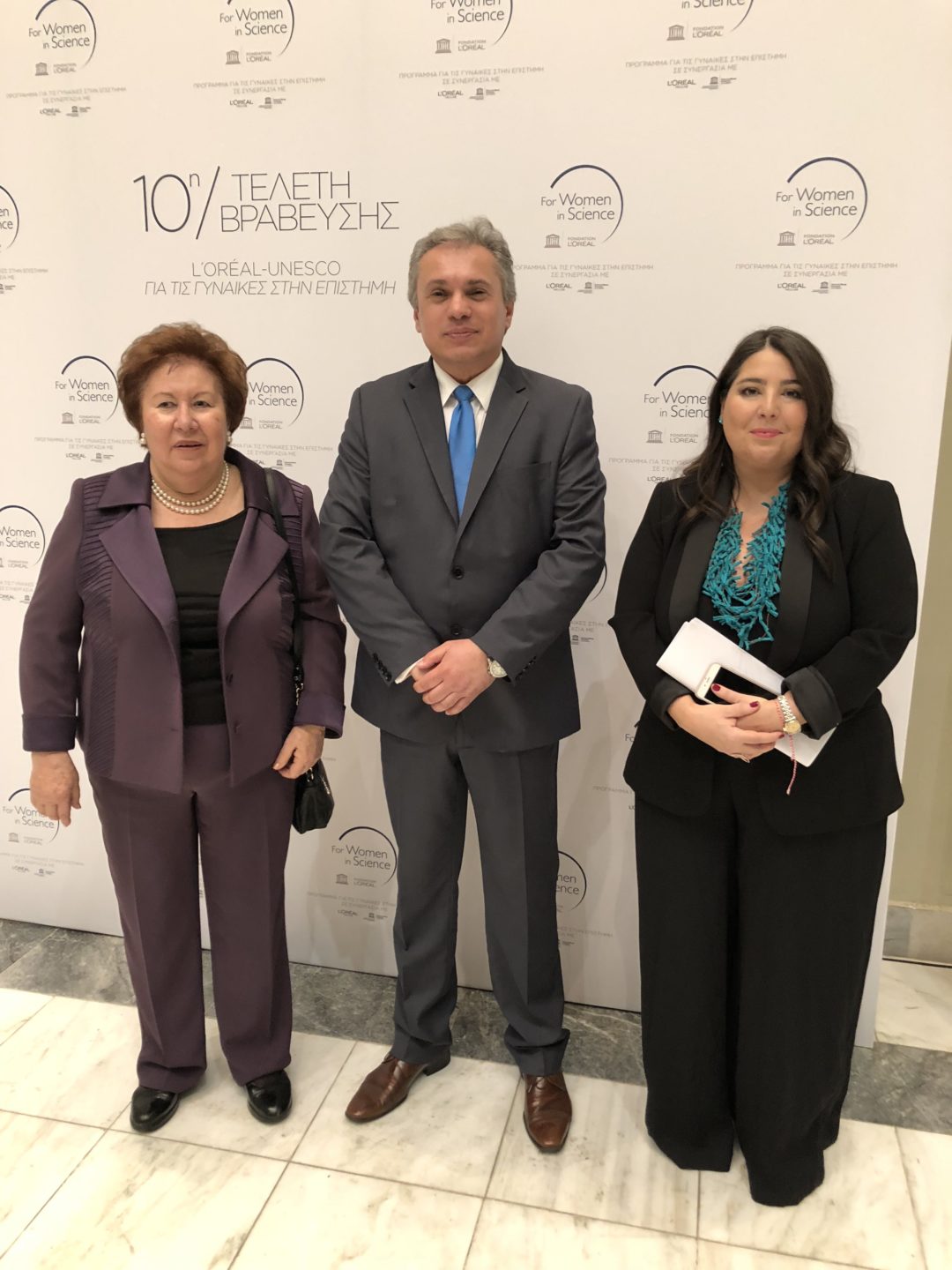 The President of the Greek National Committee for UNESCO, Maria-Aikaterini Papachristopoulou – Tzitzikosta, the Assistant Secretary General Christina Boulakaki & The Founder and President of EHICA, Vassilis Stathakis 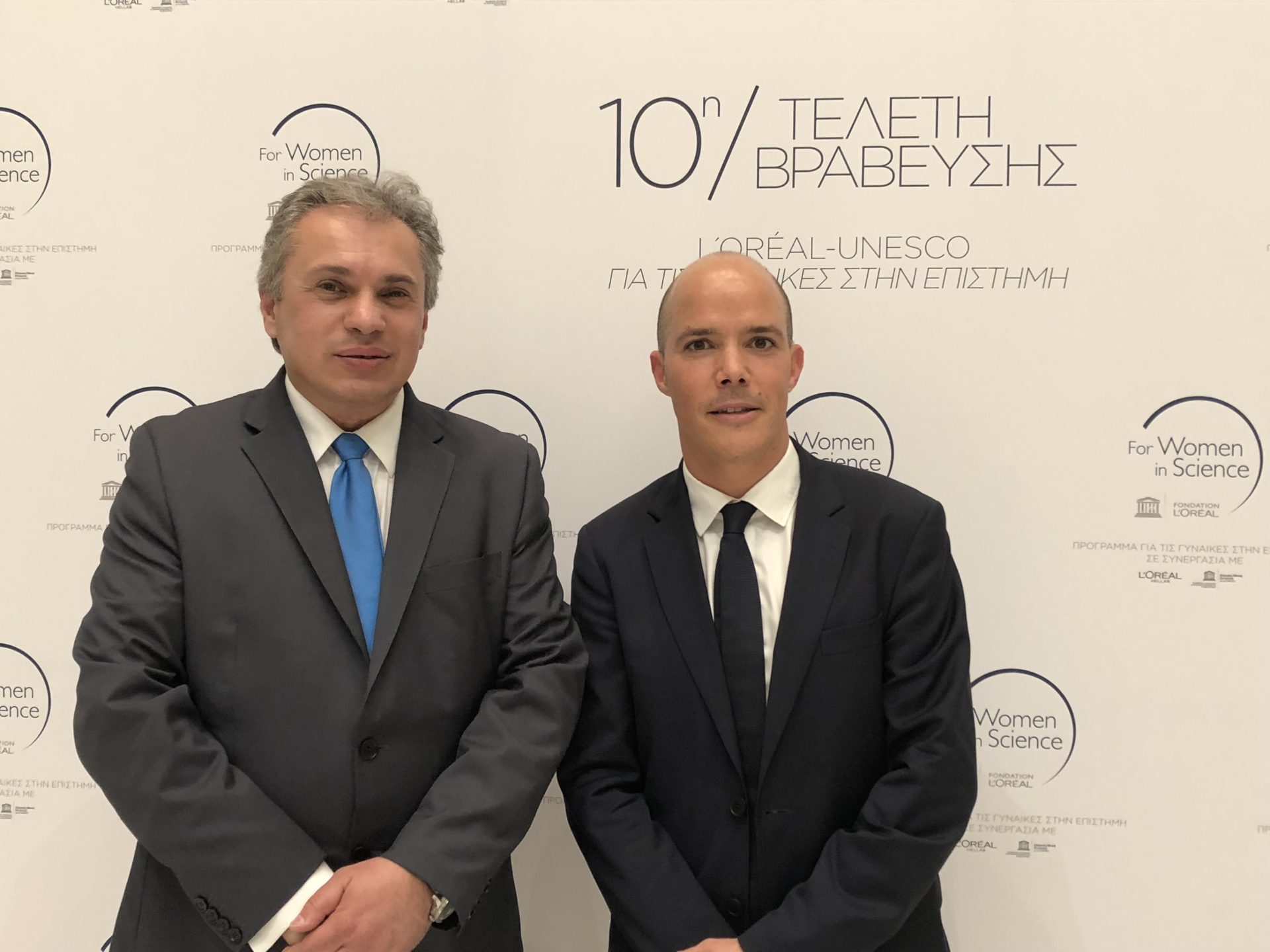 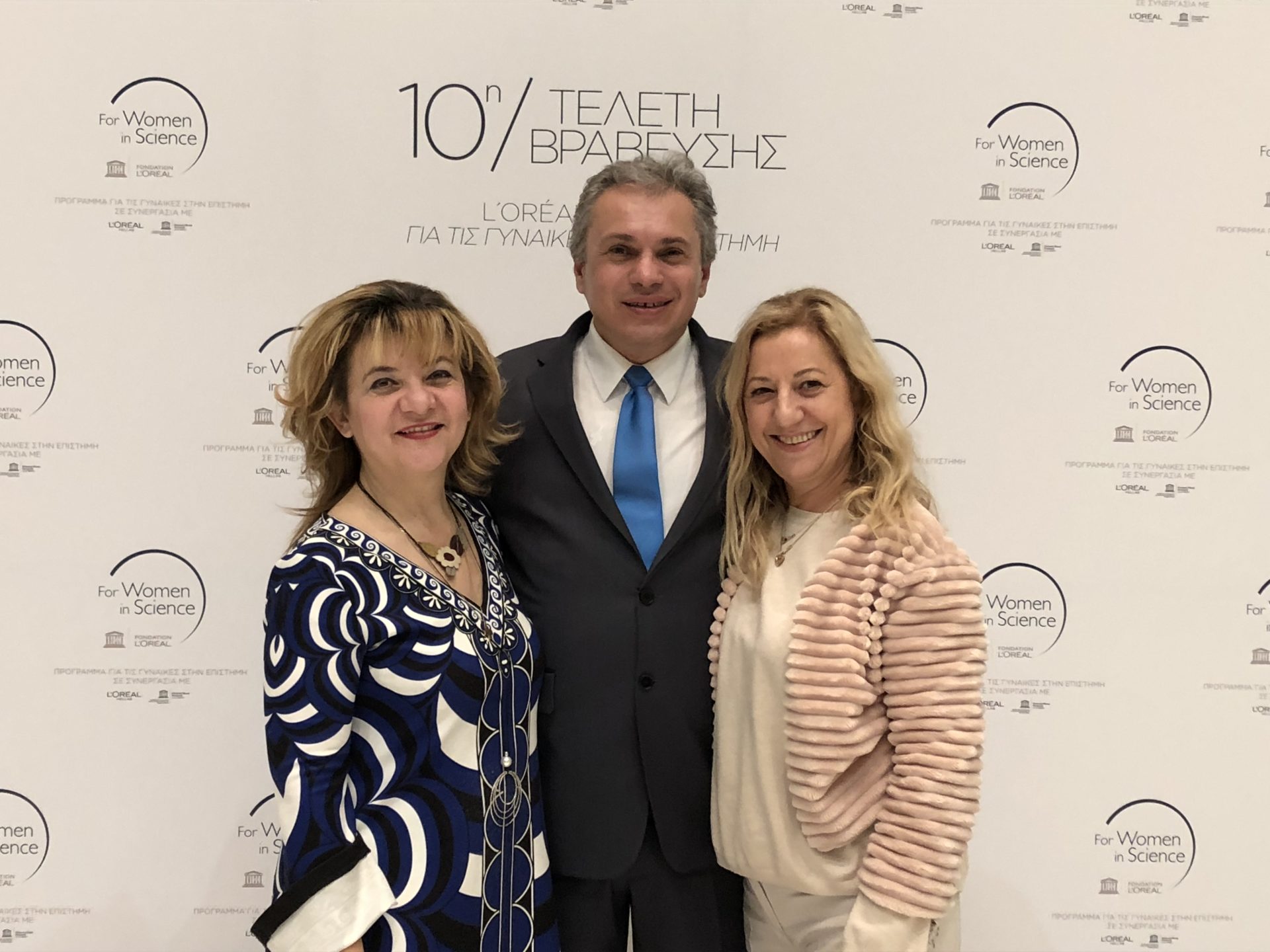 Eleni Rapti, the General Directorate of Antiquities of the Ministry of Culture, Paraskevi Moloni from the Ministry of Rural Development and the Founder and President of EHICA, Vasilis Stathakis 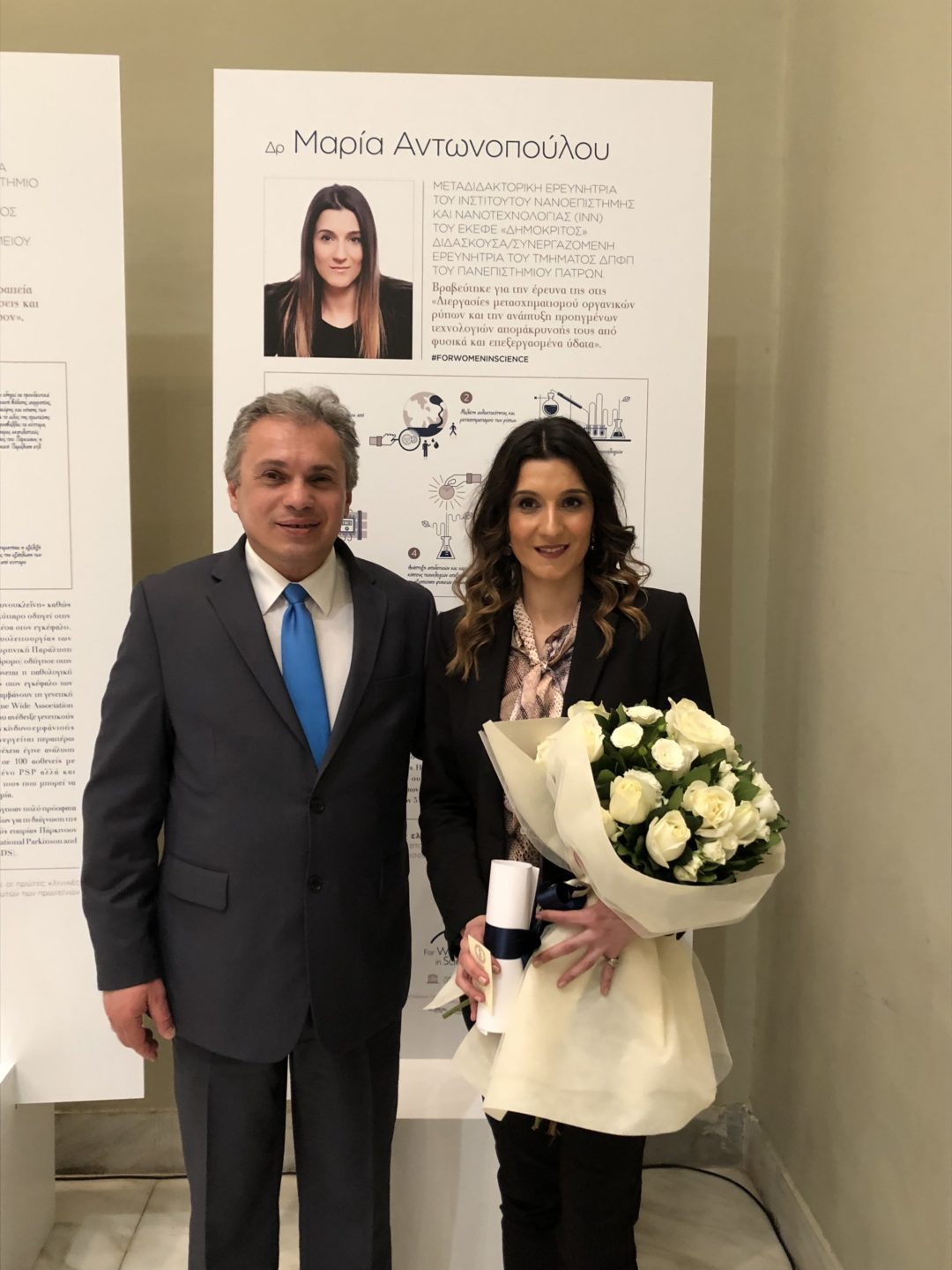 Dr. Maria Antonopoulou, INN Postdoctoral Researcher, NCSR “Demokritos” and Taught / Associate Researcher at the Department of Environmental and Natural Resources Management of the University of Patras awarded for her research and Founder and President of EHICA, Vasilis Stathakis 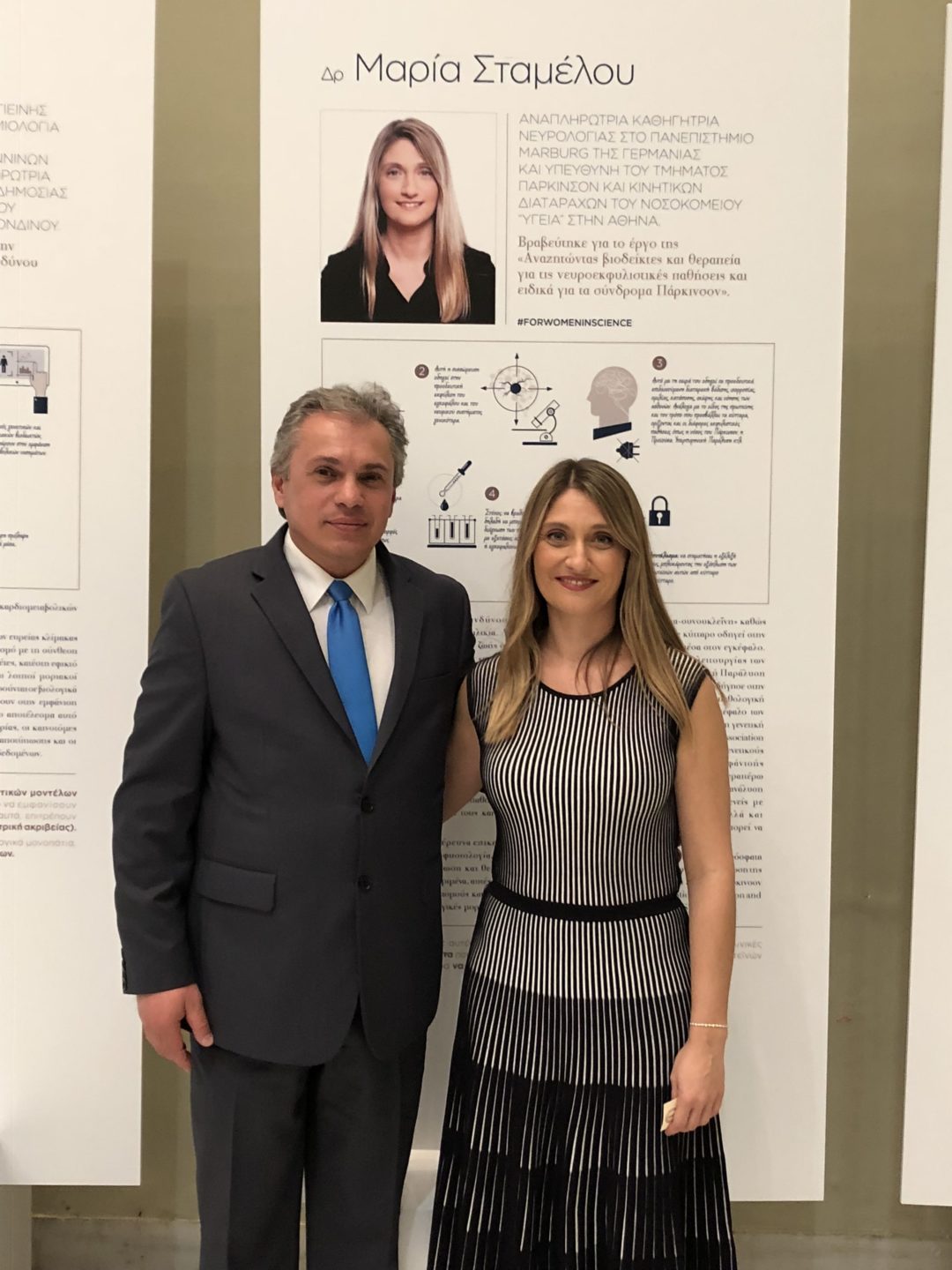 Dr Maria Stamelou, Associate Professor of Neurology, University of Germany and Head of the Department of Parkinson and Kinetic Disorders of the “YGEIA” Hospital, awarded for her work and Founder and President of EHICA, Vasilis Stathakis 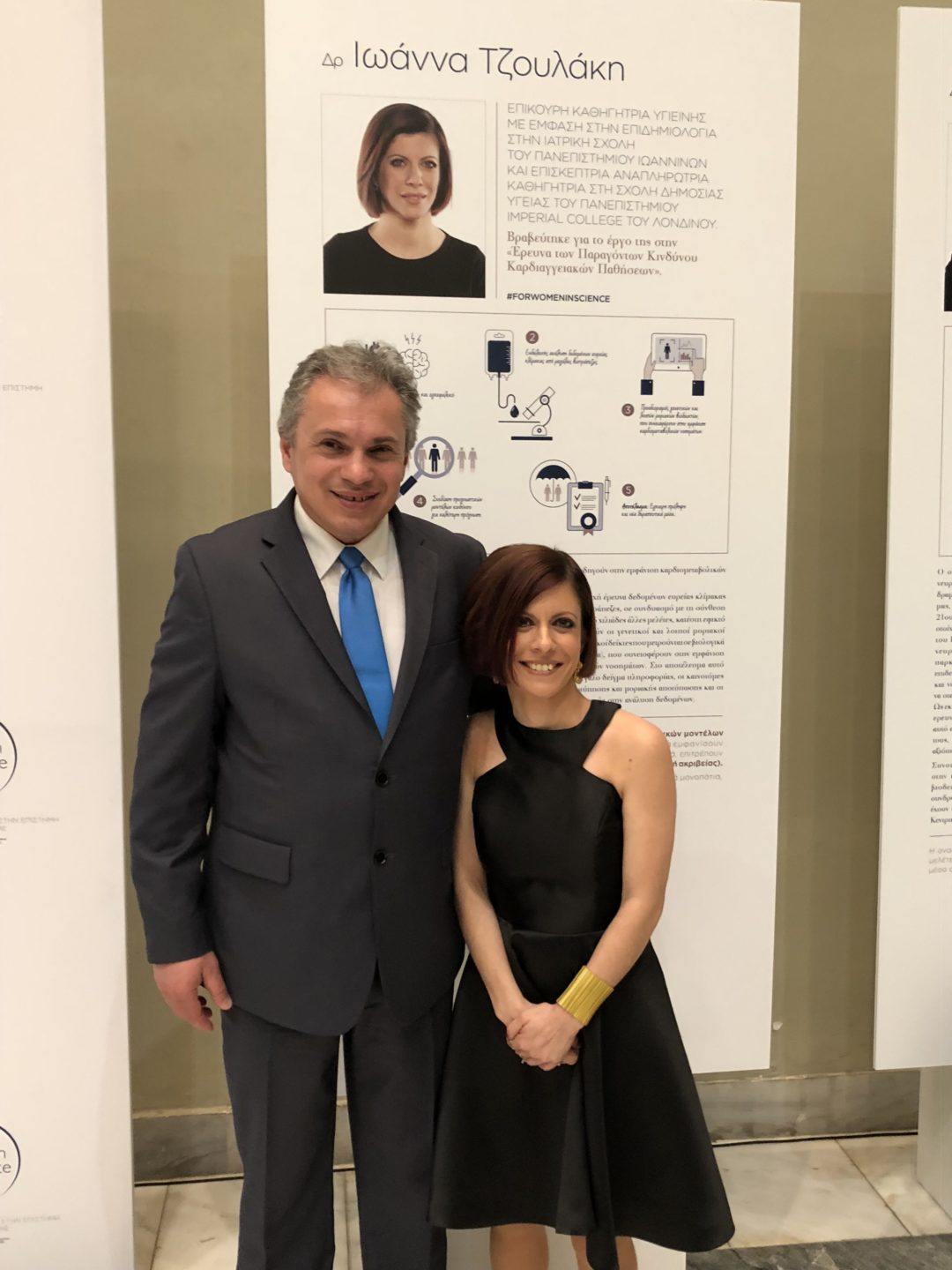 Dr Ioanna Tzoulaki, Assistant Professor of Hygiene with emphasis on Epidemiology at the Medical School of the University of Ioannina and Visiting Professor, Professor at the School of Public Health at Imperial College London, awarded for her work and Founder and President of EHICA, Vasilis Stathakis 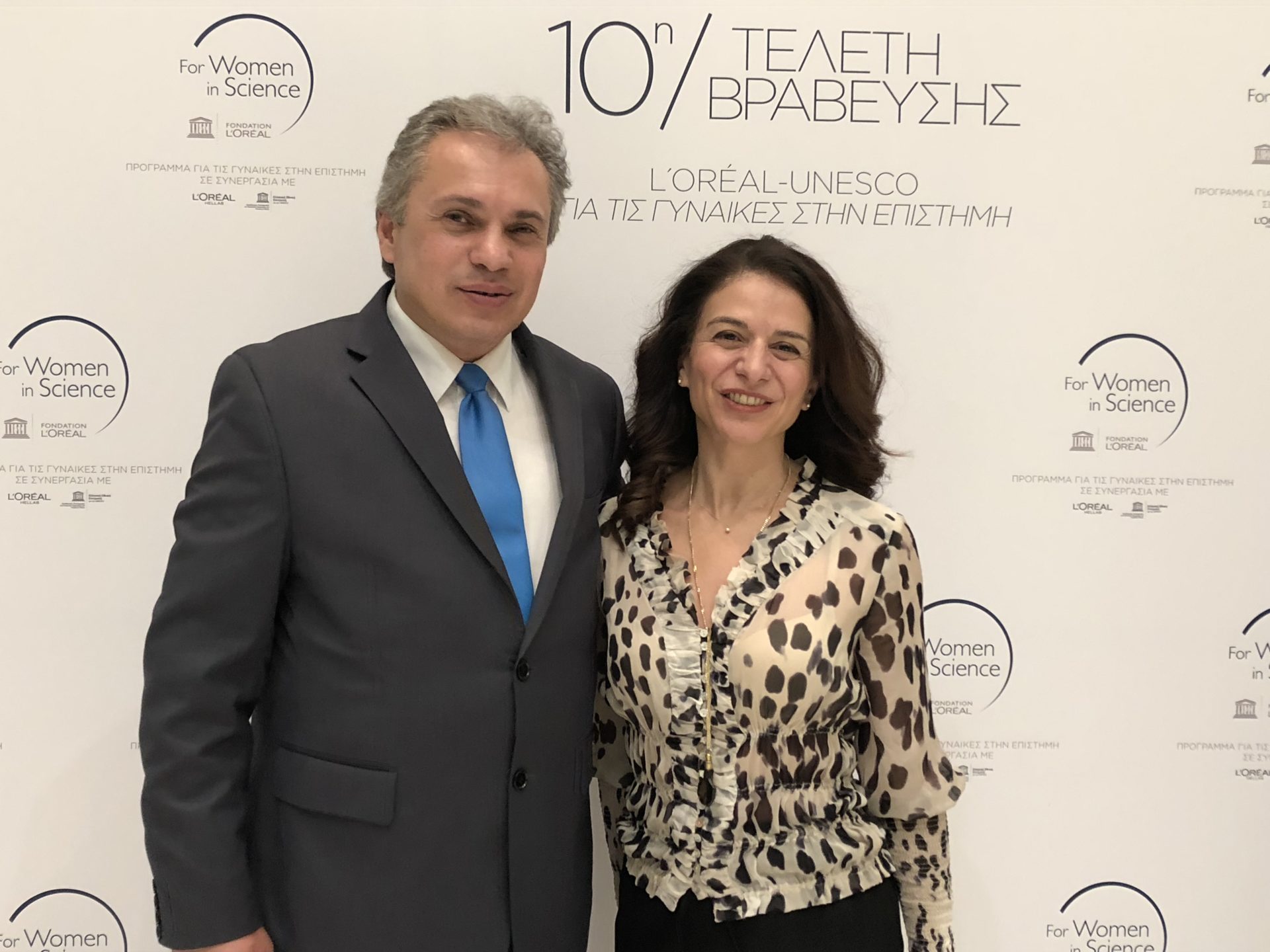 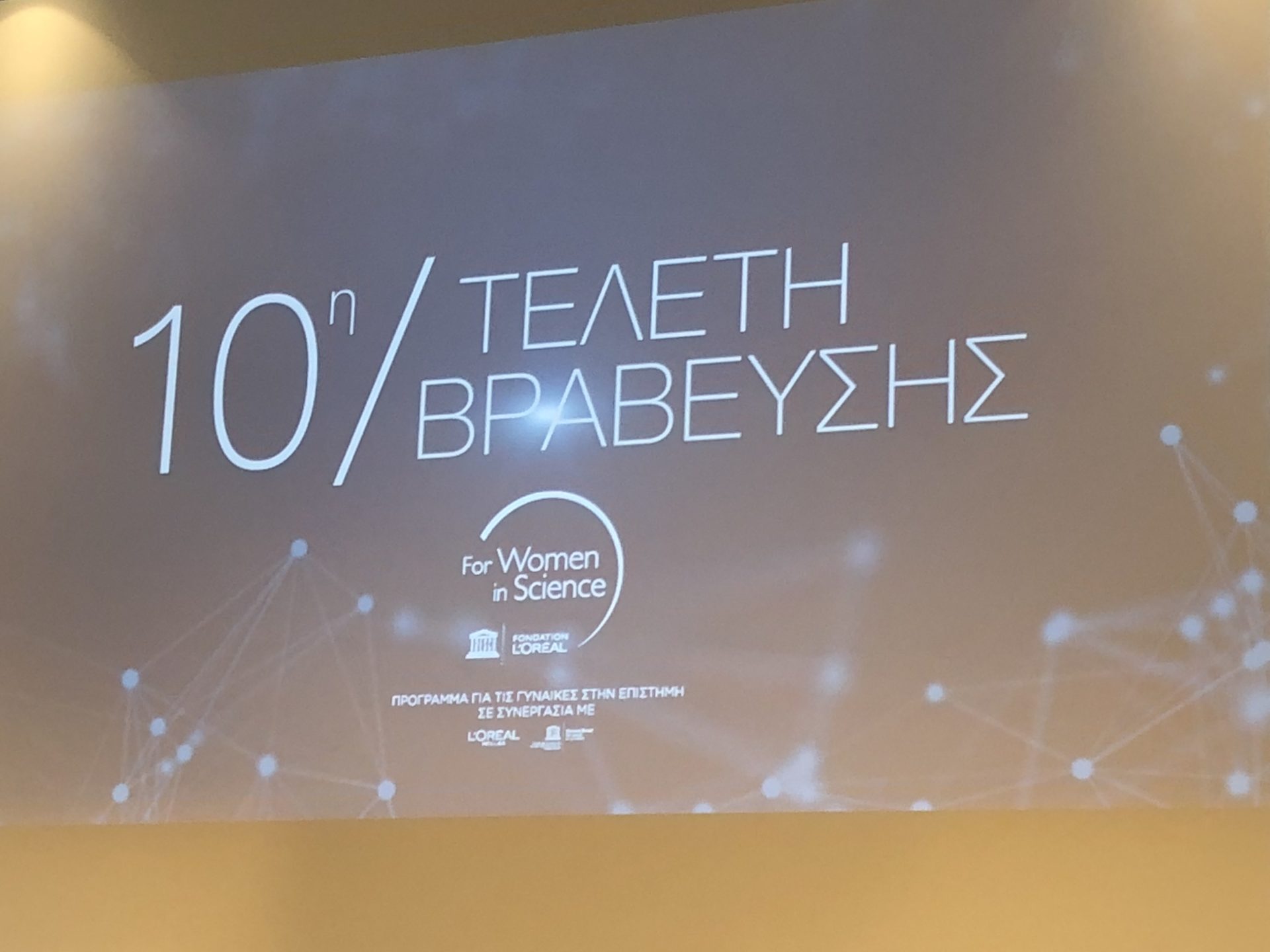 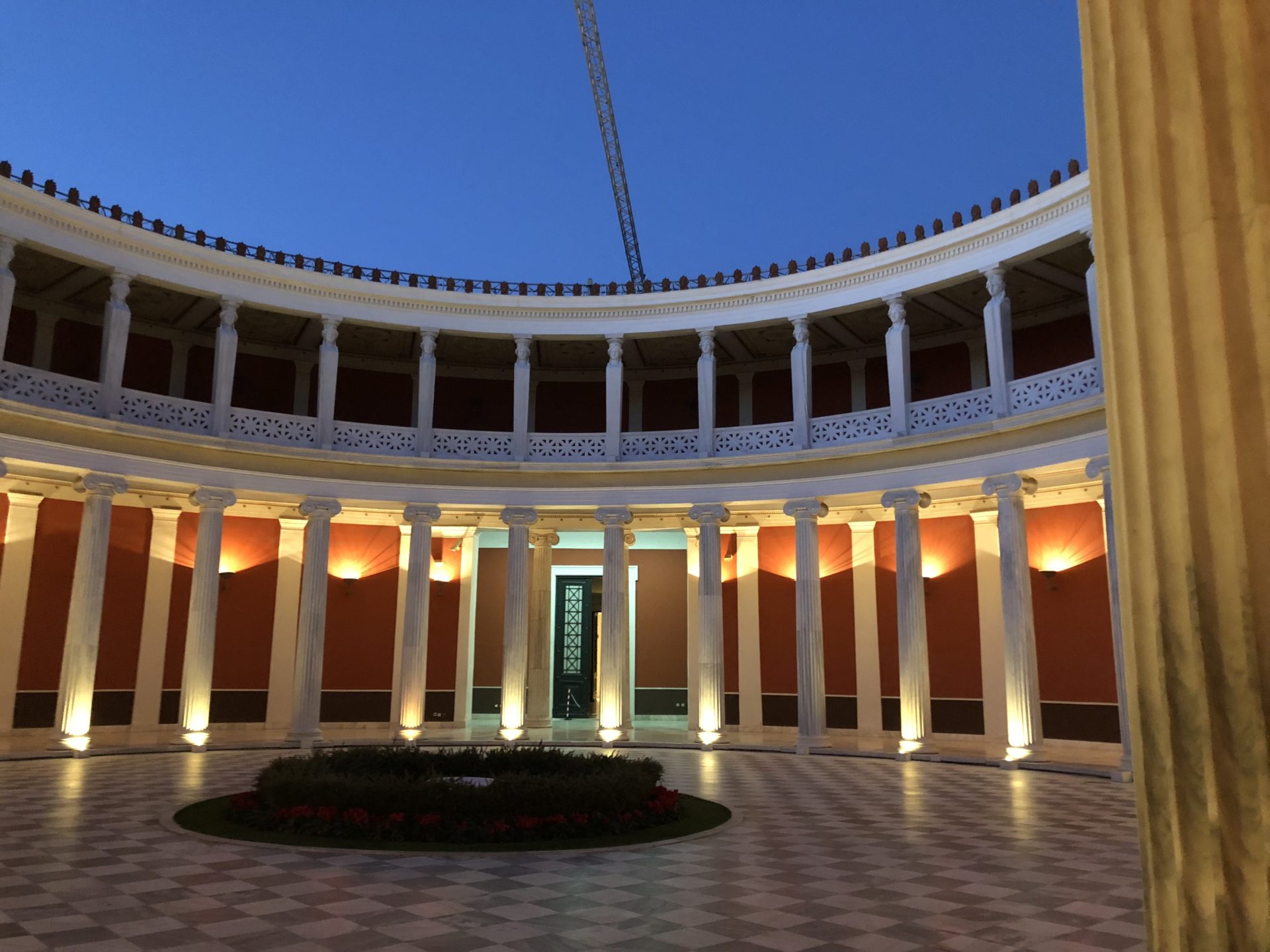 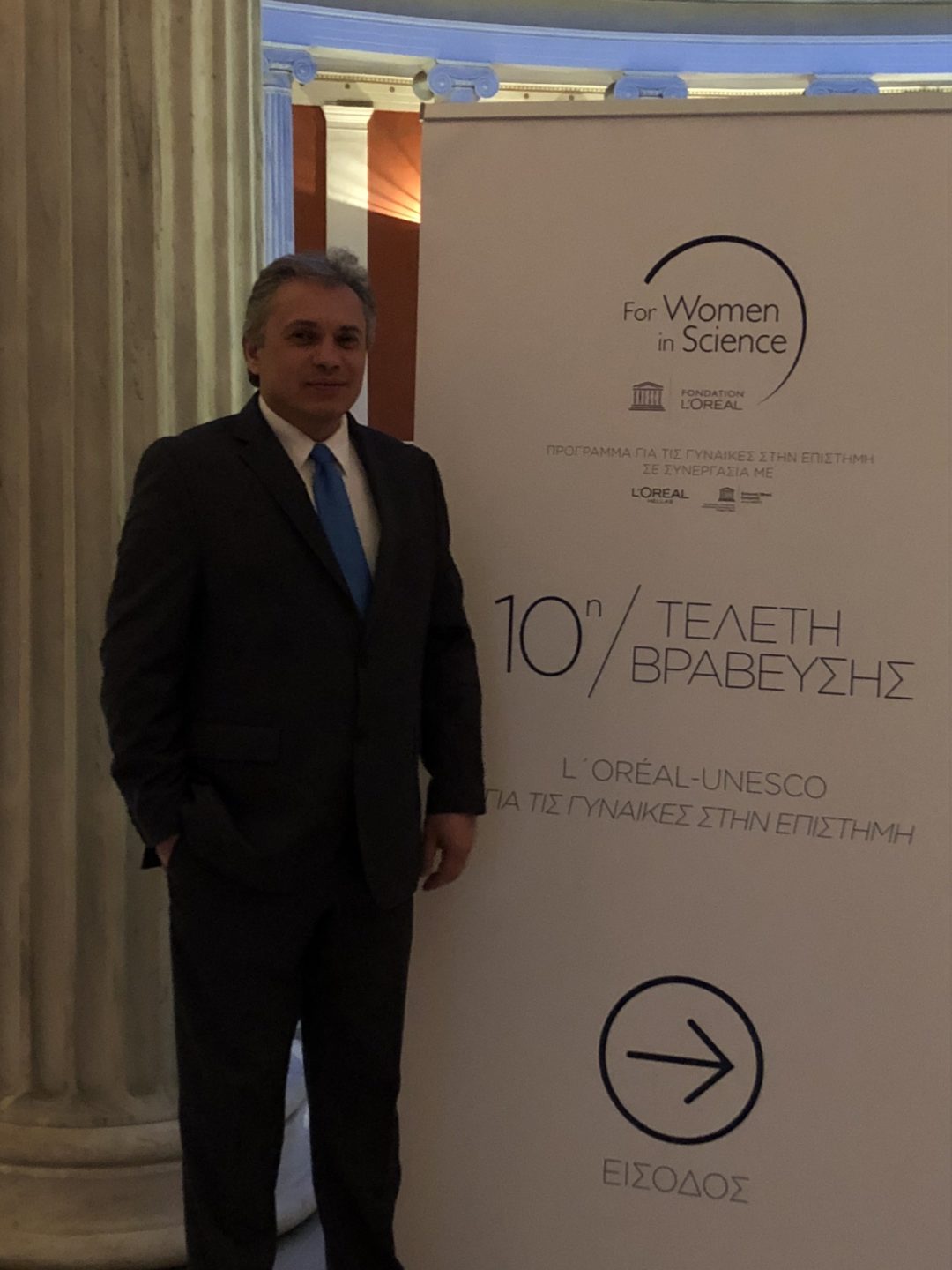 From the 10th celebration of L’ORÉAL-UNESCO Greek Awards for Women in Science by L’Oréal Hellas and the Greek National Committee for UNESCO held at the Zappeion Palace on Wednesday 6 March 2019.