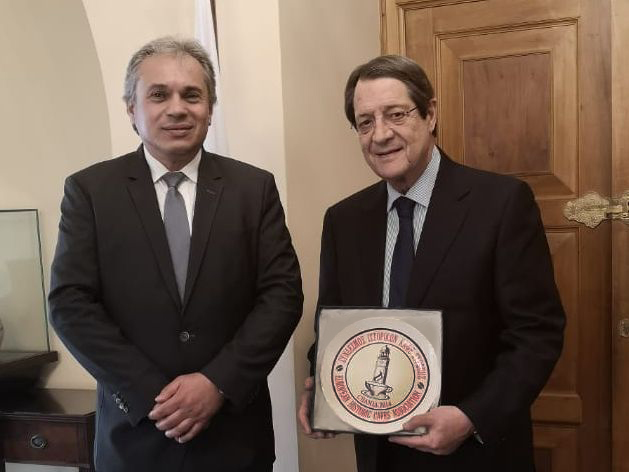 Posted at 10:49h in News by kipos
The President of the Republic of Cyprus, Mr. Nikos Anastasiadis, and the Founder and President of the European Historic Cafes Association (EHICA), Mr. Vassilis Stathakis, had a meeting at the Presidential Mansion in Nicosia on Thursday 16 May.
The purpose of the meeting was the briefing of Mr. Nikos Anastasiadis for the International Forum “Cultural Routes” of the Council of Europe that will be hosted in Chania on 7th & 9th of October 2020.
Mr. Stathakis officially invited Mr. Anastasiades to the International Forum, which will bring together representatives from the Council of Europe as well as delegates from more than 50 countries.
The proposal for the hosting of the 10th International Advisory Forum “Cultural Routes” was formally made by Mr. Stathakis to the executive secretary of the Council of Europe’s Enlarged Partial Agreement on Cultural Routes and Director of the Cultural Routes Institute Mr. Stefano Dominioni. This proposal was immediately welcomed by representatives of the CoE,  the Ministry of Culture and Sports, the Ministry of Tourism, the Greek Tourism Organization, the Region of Crete, the Municipality of Chania and the Chamber of Commerce and Industry of Chania, who co-organize the forum .
It is worth mentioning that the proposal was based on the idea of Mr. Stathakis to create a new Cultural Route by the name “Route of the Historic Cafes.
An idea based on the history and importance of the Historic Café “Kipos”, in Chania, which Mr. Stathakis is the owner of the business.
Mr. Anastasiades said he was pleased to be invited to such an important event, stressed the importance of tradition and culture as a bridge that links together cities, countries and people. Mr. Anastasiades also said he would be assisting in future efforts and initiatives of EHICA.
It should be noted that the President of the Hellenic Republic Mr. Prokopis Pavlopoulos already had agreed to be present at the 2020 forum.
On the occasion of the visit, Mr. Stathakis gave President Anastasiades a commemorative gift from EHICA. 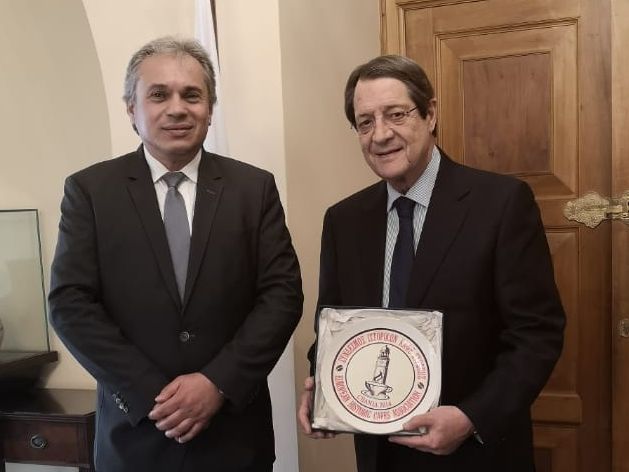 The President of the Republic of Cyprus Nikos Anastasiadis with the Founder and President of EHICA, Vasilis Stathakis, during the visit to the Presidential Mansion in Nicosia