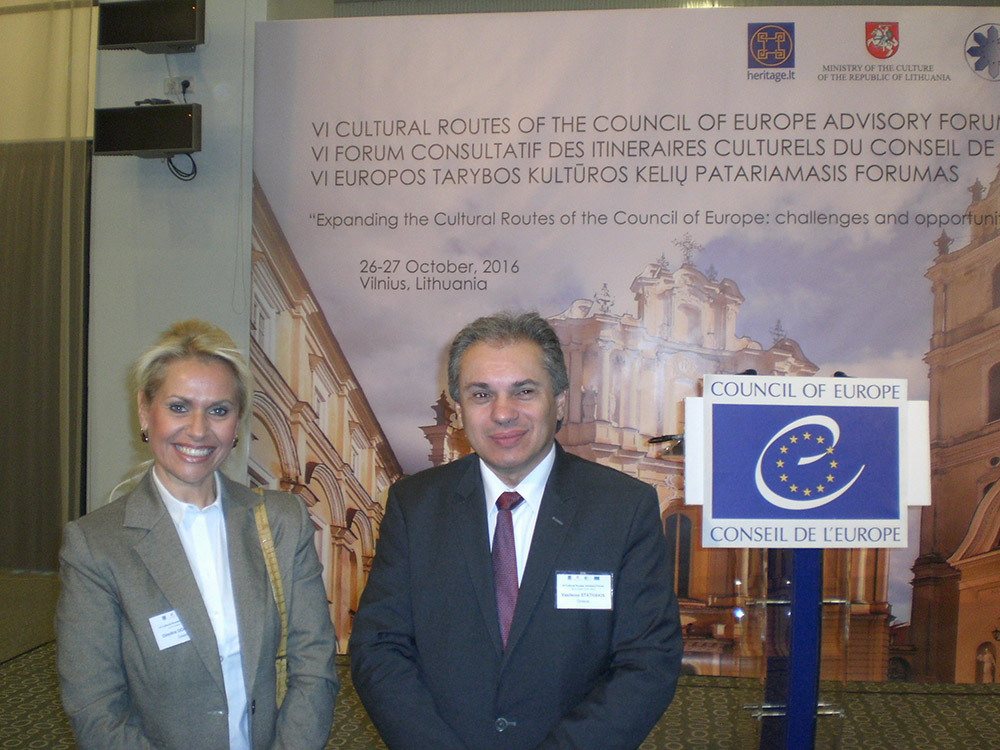 A Europe rich in history, heritage and values: the Cultural Routes Advisory Forum 2016 in Vilnius

Strasbourg, 24.10.2016 – A journey through space and time across Europe to foster cultural heritage, enhance diversity and promote intercultural dialogue: the Council of Europe Cultural Routes Annual Advisory Forum 2016 will take place at the Radisson Blu Hotel Lietuva in Vilnius (Lithuania) on 26-27 October.

Over two days of workshops and interactive debates, two main themes will be explored:

The Forum will discuss trends and challenges in relation to Cultural Routes, providing a platform for sharing experiences, reviewing progress, analysing professional practices, launching new initiatives and developing partnerships across Europe and beyond. Participants range from managers among the 32 cultural routes of the Council of Europe to representatives of national ministries, European Union and International Organisations, academics, experts and tourism professionals.

Šarūnas Birutis, Minister of Culture of Lithuania will open the event together with Rasa Noreikiene, Vice-Minister of Economy of Lithuania, Claudia Luciani, Director of Democratic Governance of the Council of Europe, Colette Flesch, President of the European Institute of Culture Routes, and Ambassador Carlo Krieger, Director of Legal and Cultural Affairs of the Ministry of Foreign Affairs of Luxembourg.

The moderators will be Alfredas Jomantas, President of the Governing Board of the Enlarged Partial Agreement on Cultural Routes (EPA) of the Council of Europe, and Stefano Dominioni, Executive Secretary of EPA and Director of the European Institute of Cultural Routes.

An award ceremony for “The Fortified Towns of the Greater Region” –the 32nd Cultural Route of the Council of Europe certified in 2016 (France, Germany, and Luxembourg)- and the signature of a Memorandum of Co-operation between the Council of Europe and United Nations World Tourism Organisation (UNWTO) will be among the highlights of the event.

The Cultural Routes programme, launched by the Council of Europe in 1987, highlights the different contributions of countries and cultures of Europe to a common heritage, by means of a journey through space and time.  From the legendary path of Santiago de Compostela Pilgrim routes to the nautical courses in the Mediterranean Sea of the Phoenicians’ Route ; from the cross border legacy of the Viking Routes to the footsteps in concert halls and opera houses of European Mozart ways ; from the past glories of the Via Regia to the mythical and sacred Routes of the Olive Tree : 32 cultural routes going through 56 countries emphasising European richness in architecture, landscape, culture, society and religion.

The Enlarged Partial Agreement (EPA) on Cultural Routes, with headquarters in the Abbaye de Neumünster  in Luxembourg since 2011,  seeks to reinforce the potential of Cultural Routes for cultural co-operation, sustainable territorial development and social cohesion, with a particular focus on themes of symbolic importance for European unity, history, culture and values and the discovery of less well-known destinations. It helps to strengthen the democratic dimension of cultural exchange and tourism through the involvement of grassroots networks and associations, local and regional authorities, universities and professional organisations. It contributes to the preservation of a diverse heritage through theme-based and alternative tourist itineraries and cultural projects. An evaluation of certified routes is carried out regularly by the EPA Governing Board. As of 2016, 27 States are members of the Enlarged Agreement