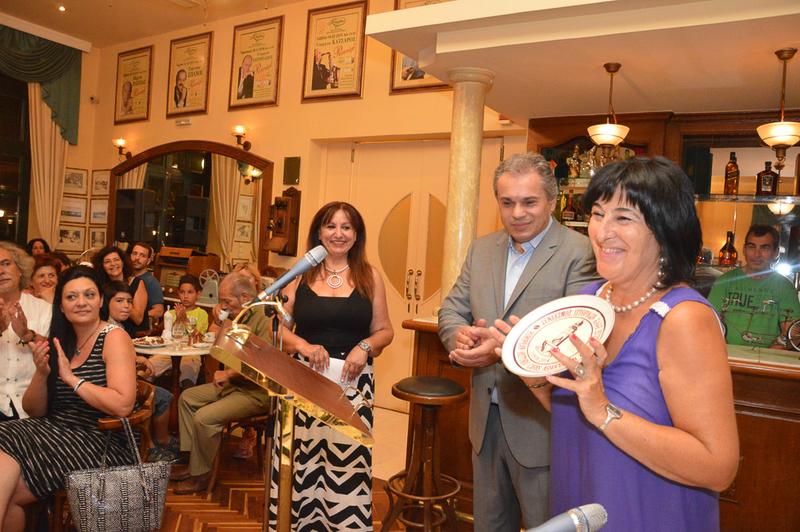 Posted at 18:35h in Χωρίς κατηγορία by kipos

The event was co-hosted by “Kastaniotis Editions”, the “Greek- French Association of Chania”, the “European Historic Cafés Association” and the bookstore “Mikro Karavi” (Small ship).

The presentation was welcomed by the president of the Greek-French Association of Chania, Stella Koutsoupaki and the president of the European Historic Cafés Association, Vassilis Stathakis, who offered the author a commemorative plate of EHICA (European Historic Cafés Association), on behalf of the Board the Association.
The lawyer, Grigoris Tzanakis, spoke with the author during the presentation, as her new book offers a different approach to existence, freeing it from the limitations of the subconscious, bringing positivity and happiness in our life.
The author of the best-seller, “Agrilia” (wild olive), through her new publication, “sheds light” on the path to happiness by asking questions such as:
“If we stopped living as victims, how would our lives be? If we believed in ourselves, what choices would we make? What if our thoughts created, instead of destroying? What if we really loved?”

Short biographical note about the author :

Joel Lopino is French with Greek origins on her mother’s side. She chose to live and build her career in Greece, daring to write in a language which is not actually her mother tongue. She studied French Literature at the University of Grenoble and at the Faculty of Philosophy at the University of Athens. She worked as a teacher for twenty years and is mother of four children.