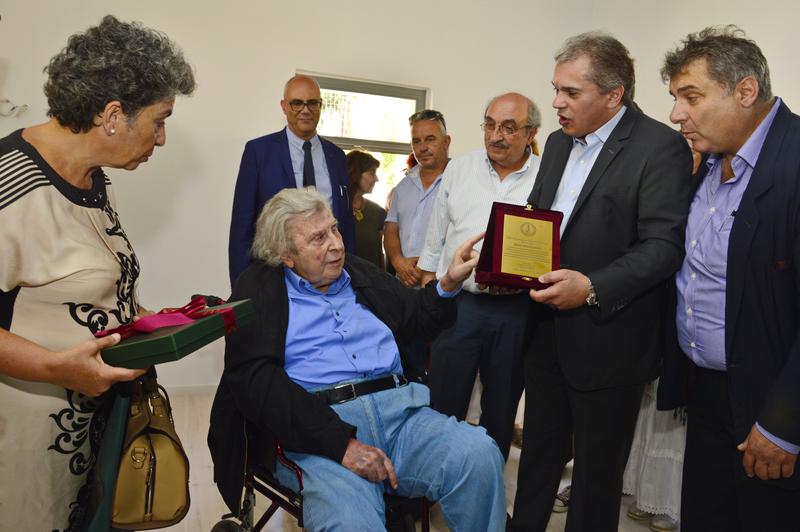 Tribute to Mikis Theodorakis, with the kind contribution of the European Historic Cafés Association, as part of a series of events which were organized in Chania, the hometown of the emblematic musician and composer
Mikis Theodorakis was welcomed with honour and was given the golden key of the city, as well as the golden medal of the Polytechnic School of Chania. During his visit to the place that he characterized as source of his inspiration and to his old house in Galata, which now is a museum dedicated to Mikis’ and Yiannis’ Theodorakis work, he was given an honour plaque by the president of the European Historic Cafes Association.
Mr. Stathakis thanked him, among other things, for his contribution to the association’s website with his ballad “Omorfi poli” (Beautiful City). Mr. Mikis Theodorakis was received at his old house by the children’s choir of the Venizelio Odeio (Conservatory) of Chania, singing the famous song “To karavaki” (The little ship) that he composed when he was young.
The event was organized by the Association “Cretan Friends of Mikis Theodorakis” and the municipality of Chania. Mr. Theodorakis was accompanied by Mr. George Agorastakis, President of the Association “Cretan Friends of Mikis Theodorakis”, his daughter, Margarita and other friends or relatives, while he was welcomed by the mayor of Chania, Mr. Tasos Vamvoukas and the former mayors, Mr. Manolis Skoulakis and Mr. Manolis Stamatakis. The mayor thanked Mr. Theodorakis for his undoubtedly valuable contribution to the international cultural patrimony, while he emphasized the diachronic dimensions of his music. He added that the commemoration of his work and the contact of the future generations with it is guaranteed by the transformation of his old house into a museum dedicated to his magnificent work, the digitization of which is promoted, with the aid of the Polytechnic School of Crete and other educational institutions and will be dedicated to the work of Mikis and Yiannis Theodorakis.
The old Customs Office was renamed as Modern Cultural Center “Mikis Theodorakis” by the mayor, who also referred to the celebration of the “Mikis Theodorakis” Festival, in collaboration with the Association “Cretan Friends of Mikis Theodorakis”, a series of summer events related to his work. The mayor mentioned that this is a promise for the present and the future, which will always connect the city of Chania to him and his work.
Mr. Stavros Arnaoutakis, head of the Region of Crete, also, met Mr. Theodorakis at the old Customs Office and greeted the event that took place on Saturday night at the Center of Mediterranean Architecture, when the Municipality of Chania declared Mr. Theodorakis as honorary citizen of Chania. On behalf of the Polytechnic School of Crete and the Senate, the rector, Mr. Vasilis Digalakis, referring to the social dimension of Mr. Theodorakis’s contribution, awarded him the gold medal, the institution’s highest award.
Among the people who attended the event was also the archbishop of Crete, Irinaios, the mayors of different municipalities of Chania, as well as members of the local authorities and representatives of the field of art and politics.
As part of the honoring events, the mayor of the municipality of Apocoronas, Mr. Charalampos Koukianakis and the municipal council declared Mr. Theodorakis honorary citizen, giving him the gold key of the municipality, during an event at the open theatre “Mikis Theodorakis” in Emprosneros.
The president of the Musicians’ Association of Chania “O Charchalis”, Mr. Stelios Lainakis, and its board declared Mr. Theodorakis honorary president of the association. The contribution of the music groups “Vamos Ensemble”, “Passe-pARTout” and the children’s choir of the Conservatory of Chania to the organization of the events was, also, significant.